In 1877, The Adelphi Hotel opened its doors to well-heeled vacationers seeking the lap of luxury among the natural spas and springs that made Saratoga a resort destination. Prominent politicians met with movers and shakers of the day at the famed Adelphi Hotel bar to pen deals bringing horse racing and casinos to the region, and the hotel was once considered a hub of Saratoga society. Through a visionary redesign, this remnant of 19th century Saratoga hospitality is reborn, prepared to welcome visitors once again. William McCaffery, a former conductor on the Rensselaer and Saratoga Railroad, inherited the Old Adelphi Hotel from his wife, Anna Perry, in the mid-1870s.  McCaffery determined that the hotel needed a fresh new start and remodeled.  The new, larger Victorian-style Adelphi Hotel opened in 1877, a year after the country’s centennial. By 1870, Saratoga Springs was the nation’s top upscale resort relying on natural mineral springs, horse racing, gambling, and luxury hotels. Ornate mansions reflecting every type of Victorian architecture were built by the rich on North Broadway and around town from the 1870s to the turn of the twentieth century. Dubbed summer “cottages” by their wealthy owners, they hosted visiting presidents, ex-presidents, politicians and business magnates. 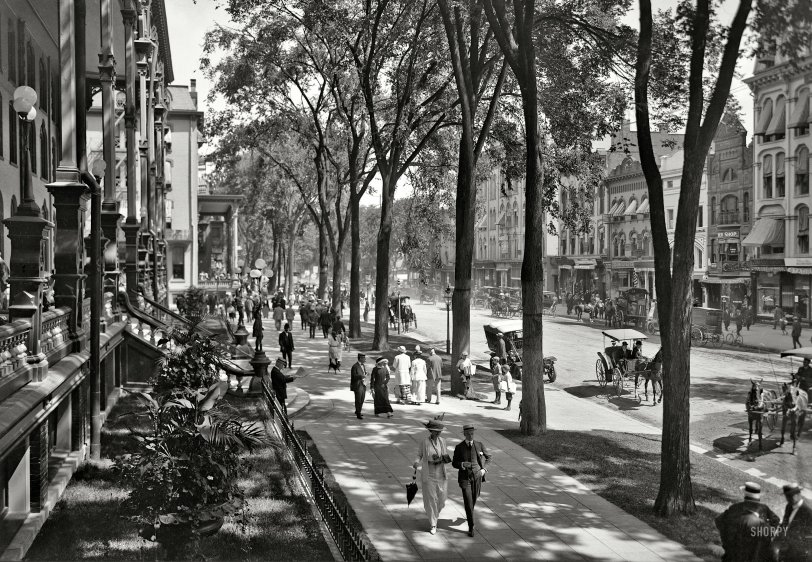 A page from “The Visitors Guide to Saratoga Springs: 1884” 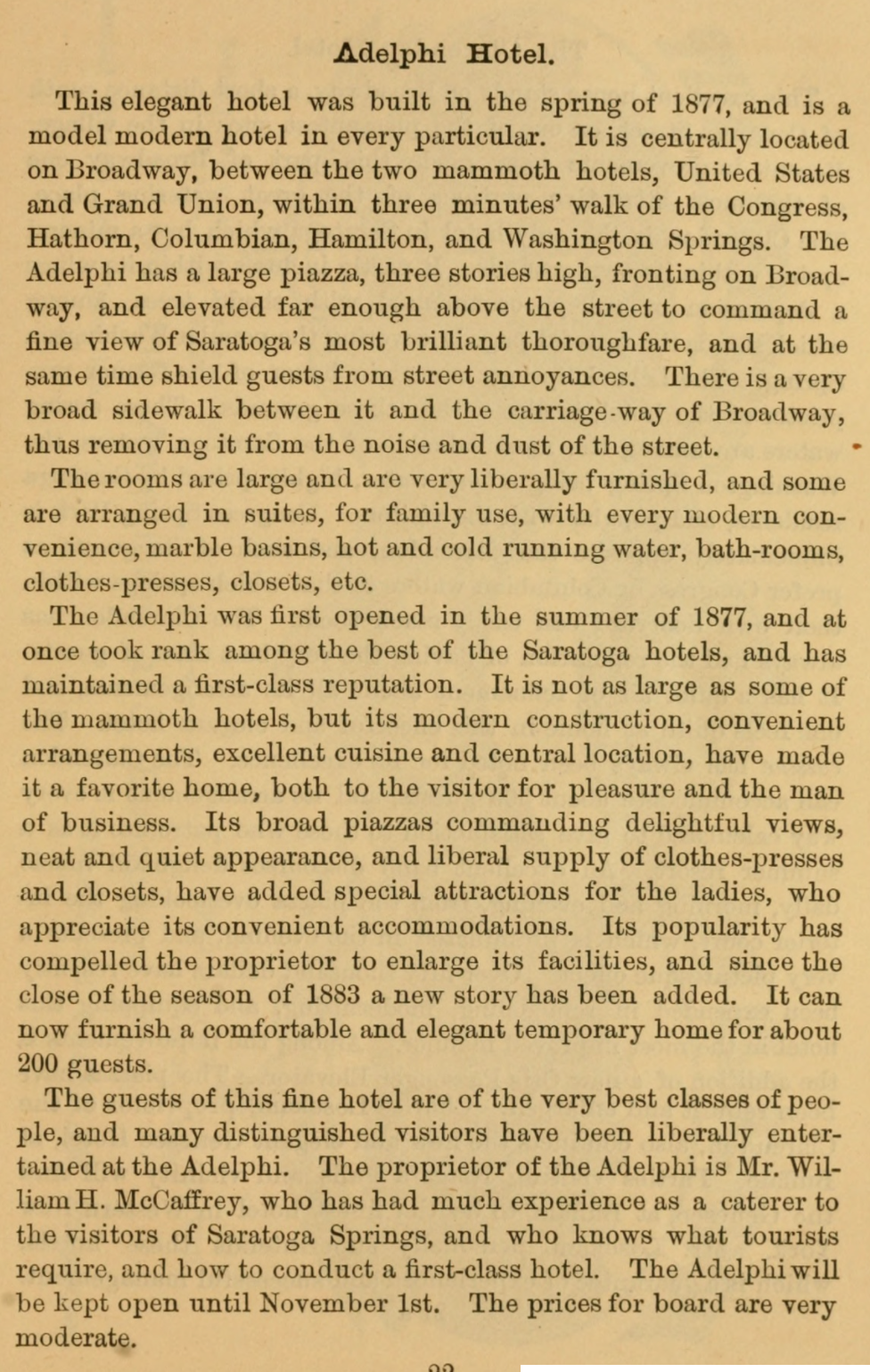 One of the Adelphi’s first guests was John Morrissey, world heavyweight champion, congressman, state senator, and founder of Saratoga’s thoroughbred racecourse and the Canfield Casino in Congress Park.  He often invited friends to join him at the Adelphi, including one of the wealthiest men in the country, Commodore Cornelius Vanderbilt, who frequented Saratoga for the races.  In 1878, a year after the Adelphi opened, Morrissey died of pneumonia at the age of 47 at the Adelphi Hotel.  He was laid in state in the second-floor parlor that opened onto the piazza. 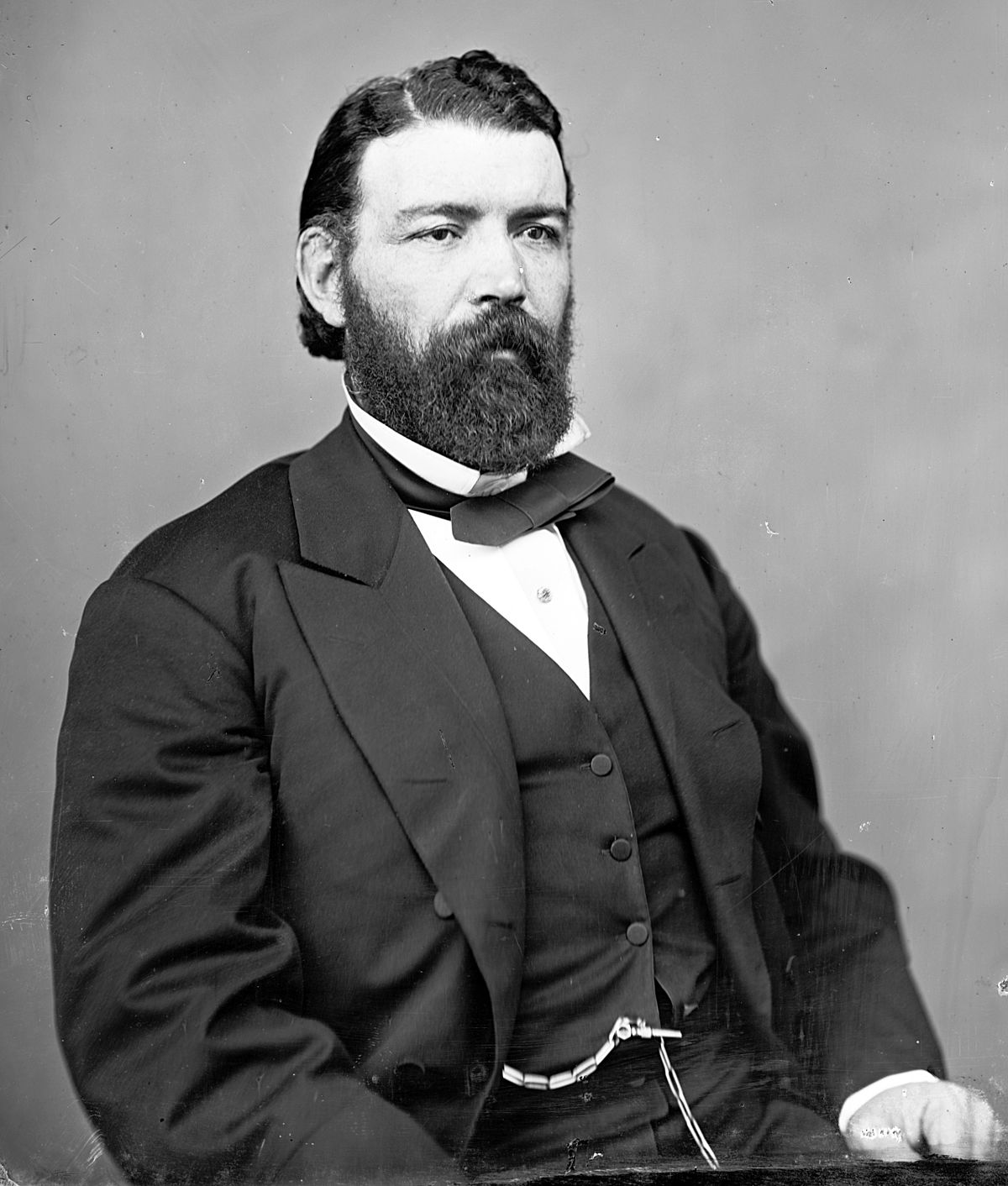 William McCaffrey passed in 1886 and in 1898, George Farnham, owner of the American Hotel (now known as the Rip Van Dam), purchased the Adelphi and operated the two hotels until his death in 1922.

At the turn of the century, the rise of anti-gambling sentiment initiated the decline, and subsequent demise, of several venerated establishments. Morrisey’s Club House, operating as the Congress Park Casino under the ownership of Richard Canfield, closed in 1907. In the absence of any interested buyers, the Casino property was purchased in 1911 by the village. With fewer visitors during the summer season, the Congress Hall Hotel, located near the Casino, closed. In 1913, the city bought the site, razed the building and added the property, with the previously purchased Casino property, to Congress Park, enlarging it to its current size. The Grand Union Hotel, once the largest hotel in the world, and the United States Hotel, two elegant and massive fixtures on Broadway, were razed in 1953 and 1945 respectively. But the Adelphi lived on, without facing the fate of its surrounding buildings. Before the property was purchased in the 1950s by Albert Farone, the hotel was owned and operated by Eugene Zuckerman. 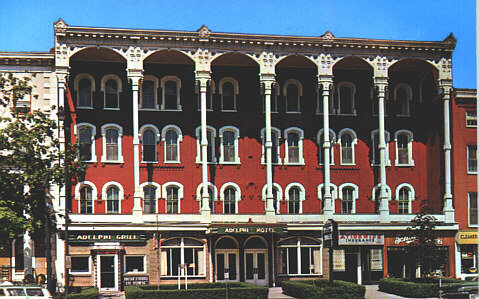 While the largest of the beautiful hotels were gone, the Adelphi remained during the late 70’s, thanks to the vision and hard work of Sheila Parkert and the Gregg Siefker. The former Nebraskans purchased the hotel in 1978 after it stood vacant for five years, then proceeded, room-by-room, to bring it back to its 19thcentury glory.